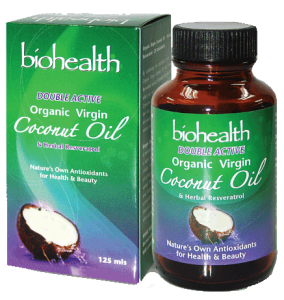 Biohealth Double Active Virgin Coconut Oil was developed following several years studying the synergistic effect between lauric acid (the main active constituent in Virgin Coconut Oil) and Grape Antioxidants with natural resveratrol (from Grape seeds and skin) in enhancing cellular protection for use as a functional food and cosmeceutical agent.

Antioxidants are nature’s way of defending (both plant cells and your cells) against attack by free radicals. Your body is exposed to free radicals both as a result of normal metabolism and from environmental toxins such as cigarette smoke, chemicals and UV sunlight. The synergistic effect of Virgin Coconut Oil and Grape Antioxidants creates a potent free radical scavenging formula with enhanced bioavailability. This means that less Virgin Coconut Oil is required to obtain an enhanced antioxidant effect. Only 1 teaspoon of Double Active Virgin Coconut Oil is required to be taken daily, or applied to the skin where needed.

Both Virgin Coconut Oil and Grape Antioxidants are considered two of the hottest new discoveries in the field of natural weight loss via stimulating metabolism and fat burning. Traditional cultures that rely on Virgin Coconut Oil and coconut products for a majority of their fat intake have been shown to have one of the lowest incidences of obesity and heart disease rates in the world. Scientists now understand that the Medium Chain Fatty Acids in VCO are rapidly converted to energy and not stored as fat. Regular cheap vegetable oils (Omega 6 oils) are a main cause of obesity and excess fat deposit (after excess refined carbohydrates). VCO has the lowest Omega 6 ratio of all vegetable oils. Excess Omega 6 from cheap vegetable oils is also seen as a major cause of the rise in inflammatory diseases, such as diabetes and heart disease (not to be confused with the heart healthy Omega 3 oils from fish). For full scientific studies on VCO and weight loss, please click here.

Virgin Coconut Oil is now the being intensively research for its effects on preventing and /or reversing the effects of various brain and nervous system diseases, including Alzheimer’s, Parkinson’s, ALS, epilepsy, dementia, even schizophrenia and autism. Much of the breakthrough work on this subject has been performed by Dr. Mary Newport in her book titled, Alzheimer’s Disease: What If There Was A Cure? In this book Dr. Newport outlines how her husbands developing Alzheimer’s Disasese led her to finding the cure in simple coconut oil. For a better understanding of how Virgin Coconut Oil is of benefit in neurological disorders, please click here. In addition, Grape Antioxidants have been widely studied for their positive effects in preventing alzheimer’s and dementia with more than 100 scientific references, click here for more scientific research links for the effects of antioxidants and  Alzheimer’s Disease.

Besides their role in plaque formation, oxygen free radicals also damage DNA. Damage of certain genes, such as those involved in the regulation of the cell cycle, can cause a cell to age faster or become cancerous. By scavenging these oxygen free radicals, Grape antioxidants help to boost your protection against the spread of abnormal cell activity, and thus may help you better control the aging process and prevent the formation of cancerous cells.

UV ray is known to cause tan and dark spots and is deeply related to skin ageing. It produces reactive oxygen species to make the skin coarse and less elastic. Studies have confirmed that Grape Antioxidants prevent damage to DNA caused by UV ray, increases the antioxidative potency in serum, decreases lipoperoxide (lipids damaged by reactive oxygen species), and also controls the activity of the inflammation transcription factor. They do this by preventing the effects of oxidative damage that results in dark spots, pigmentation and the loss of skin elasticity and wrinkling. Interestingly, their post-treatment external application was found to impart equal protection to the pretreatment; suggesting that Grape Antioxidant-mediated responses may not be sunscreen effects. These compounds have also been shown to have an anti-tyrosinase action and thus has potential as a safe antioxidant application for a skin whitening and clarifying effect.

Both Medium Chain Fatty acids such as Lauric acid and Grape Antioxidants prevent low-density lipoproteins (the so-called bad cholesterol) from forming oxidized LDL arterial plaques (a leading cause of atherosclerosis). Scientific studies have also shown that Grape Antioxidants help maintain blood pressure within the normal range by maintaining blood vessel elasticity and blood vessel dilation, while inhibiting inflammatory enzymes. Higher dietary antioxidants from drinking red wine is believed to be responsible for the French paradox that has shown that despite the high dietary fats from meat, butter and other dairy products in the French diet, they have statistically less heart disease and obesity than other European diets. Grape Antioxidants have been shown to assist fat metabolism, prevent atherosclerosis and promote healthy blood pressure.

As a food supplement: Take 1 teaspoon daily (is equivalent to the Grape Antioxidants in 2 or 3 bottles of red wine without the detrimental effects of alcohol!)

For the elderly to improve energy release in the brain, may be taken 2-3 times daily (every 4 hours).

Externally: Apply to skin and hair morning and night or as required. Very suitable for skin blemishes and dark spots.

Suitable for use by both young and old.

As some settling may occur please shake before use.

Do not refrigerate as Virgin Coconut Oil will solidify below 24 degrees C.

If solidified, simply place bottle in warm water until liquid.

As Biohealth Double Active contains approx. 10mgs of  pure Grape Antioxidants in a single teaspoon, this dosage  is within the normal dietary antioxidant range and is preferred to mega dosages that are physiologically impossible to obtain from a natural dietary source. Whether you consume internally or apply externally you can help protect your cells from free radical damage and maintain your cellular antioxidant defenses.

More on the importance of plant antioxidants

Up until the 1990s, the most widely studied antioxidants were from vitamins and minerals. Many of these are produced synthetically and much debate surrounds their actual benefits. No such debate exists in regards the necessity of plant nutrients on human health and getting one’s daily vitamins, minerals and phytochemicals from one’s diet is now understood as far more important than popping a few synthetic multivitamin tablets.

Research on virgin coconut oil, flavonoids and other polyphenols, their antioxidant properties, and their effects in disease prevention has mainly been conducted over the past 10 years. This research has revealed the importance of dietary antioxidants and that those cultures that consume daily higher levels of plant antioxidants enjoy greater health and longevity. Double Active VCO has been carefully formulated to supply an optimal and completely safe amount of Grape Antioxidants as could be achieved through a natural antioxidant rich diet.

Antioxidants are either soluble in water (hydrophilic) or in lipids or  fat (hydrophobic). You need both types of antioxidants to protect your cells. Since specific Grape Antioxidants contains both hydrophilic and hydrophobic components it is believed to act more effectively than other well-known antioxidants. When combined with Virgin Coconut Oil, these have a synergistic effect and enhanced solubility and bioavailability. This means that less Virgin Coconut Oil is required to obtain an enhanced antioxidant effect. Unlike most vegetable oils that rapidly become rancid and are subject to lipid oxidation from contact with oxygen, sunlight and heat, Virgin Coconut Oil is highly stable and has the longest shelf life and resistance to oxidative rancidity of all natural plant oils.

Virgin Coconut Oil is also being increasingly recognized as the tropical dietary paradox. Those cultures that consume most of their fats from coconuts (specific areas in the southern Philippines, India and Sri Lanka) also have statistically less obesity and heart disease. A study done in India in 1998 showed that when Indians abandoned traditional fats like ghee and coconut oil, and started using polyunsaturated fats like sunflower or safflower oils, that the rates of diabetes became alarmingly high. Studies carried out in many South Pacific Island countries have revealed the same thing: when the traditional diet high in coconut oil is abandoned in favor of more modern foods that are highly processed, including polyunsaturated vegetable oils, there is a direct increase in the rate of diabetes and other predominantly modern chronic diseases. The effect of coconut oil on improving thyroid function, the metabolic rate and enhanced fat burning has been extensively researched.